Event Report: When a Fangirl Have to Hold Up ‘Cause It’s Her Working Time

Editor’s Note: This blog was written by one of Happenn’s employees from a personal point of view. So the language will be a bit less formal from our previous and future articles. But it’s fun to read anyway, so, let’s enjoy!

I must admit that last August was one of Thailand’s hottest months. But, of course, the hotness isn’t about the weather, but it means many celebrities from other countries, such as South Korea and China, are planning to meet the fans in Thailand continuously. One of the most famous names is Jackson Wang (aka P’ Jack, which means brother Jack in Thai), who came here very often and was familiar with the culture enough almost to call him a Thai citizen. 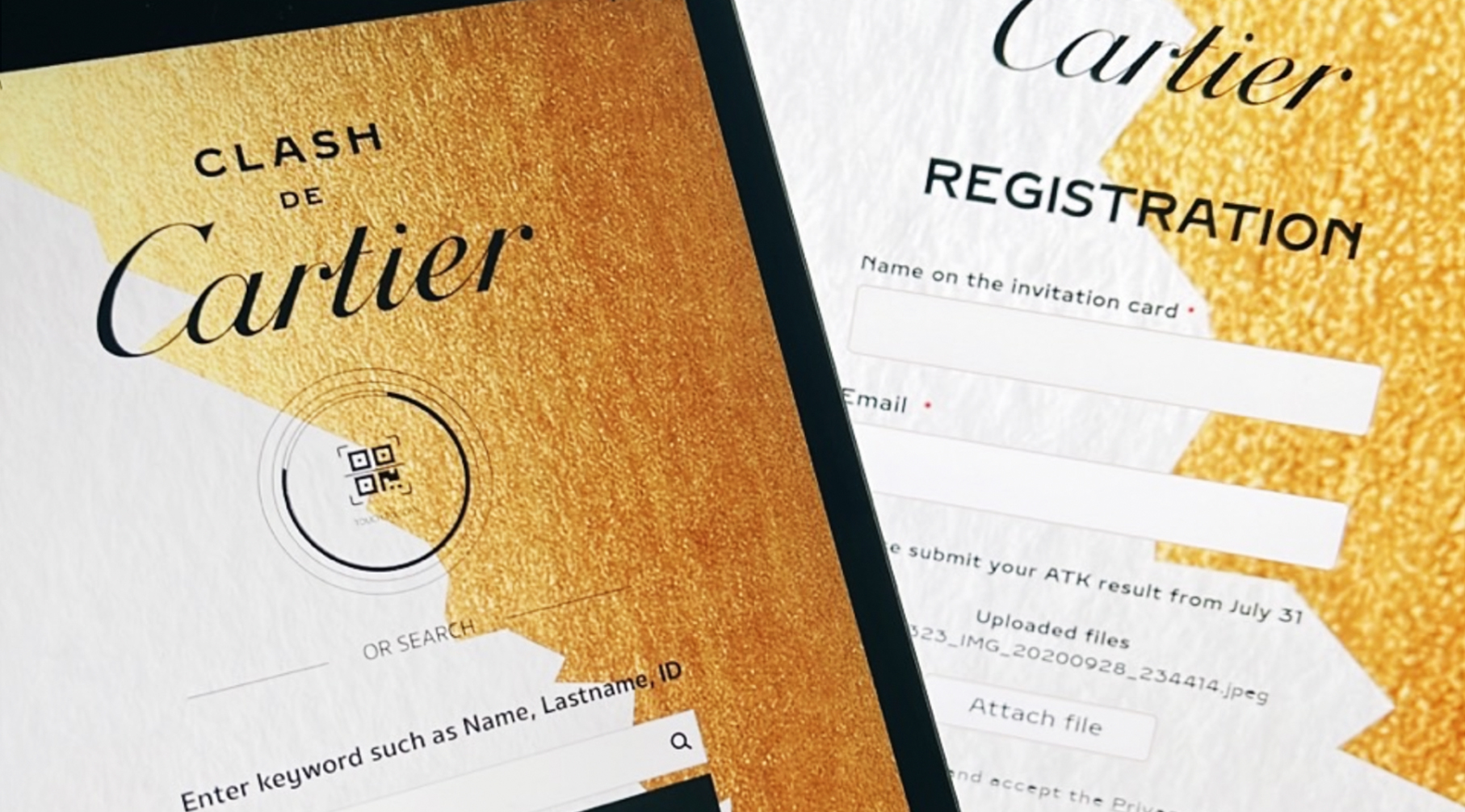 For the glamorous Clash de Cartier event, Happenn was taking part as a guest registration system provider. I am one of the staff in charge of coordinating from the beginning of the project (and it’s going to be a big lie if I say I wasn’t excited). We begin with a conversation with our clients to understand their requirements. This time it’s going to be the invite-only event like before. Usually, this registration is used to verify the attendees via the mobile phone number or email address. But for this time, we only got the full name to process the work (it’s understandable, they’re mostly the VIPs). Yet, we make it HAPPENN. There are some risks from the name-only registration method, such as the spelling, name prefix, and spacing that need to be matched with the database (and the invitation card) to ensure this is not someone trying to sneak in. But we solved all the problems by checking the backend and supporting all the guests as fast as possible, and everything went smoothly.

The challenging and new thing for this event is the system has to support (and force) the attendees to attach their ATK test results from the test within 24 hours before the event for everyone’s safety. Happenn has the feature to request this kind of information; it can upload photos from both computer and mobile devices such as a smartphone or iPad.

Get Into the Event Flawlessly with QR Code Touchless Check-in 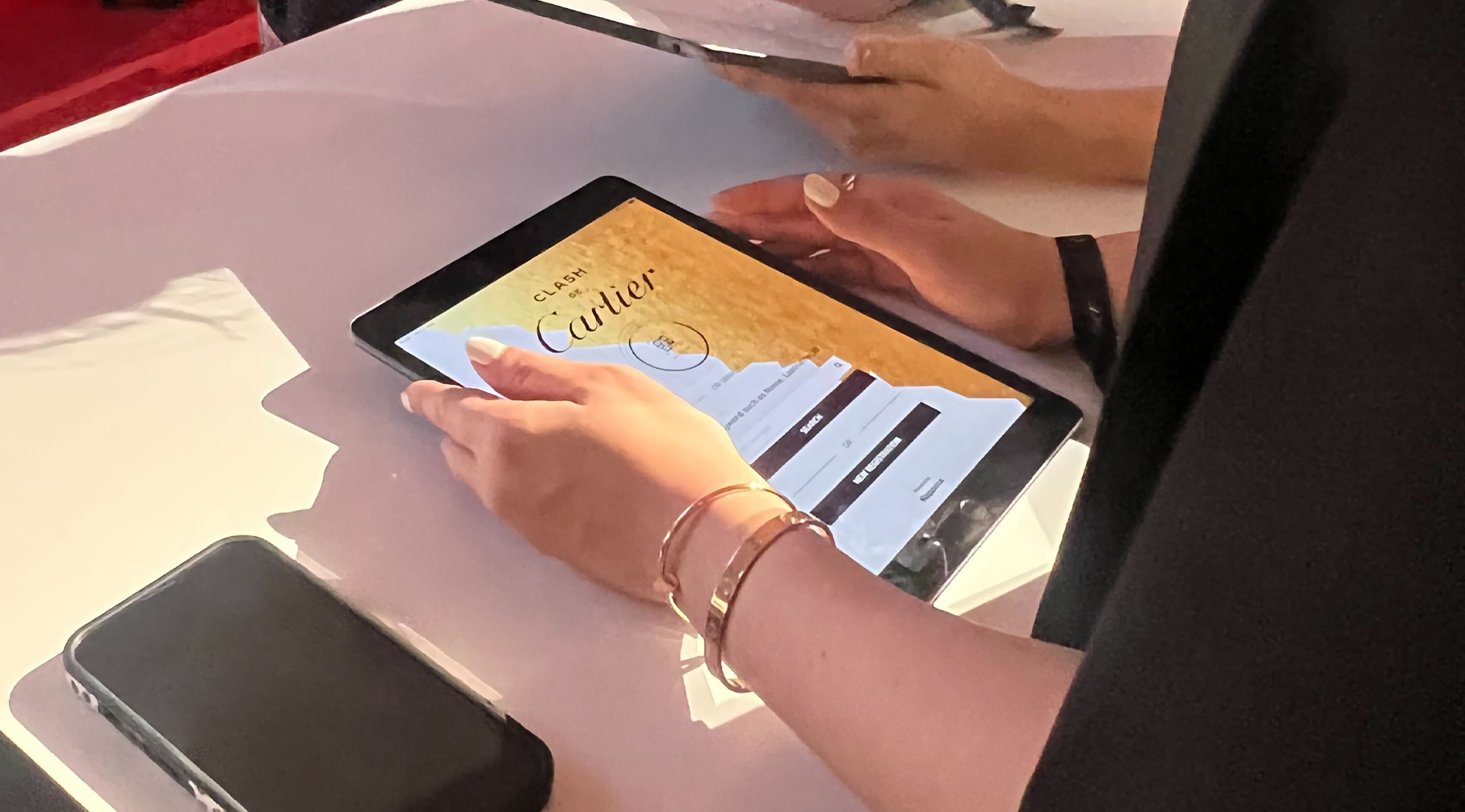 Of course, the registration system helped us manage the guests easier. But one more important thing is collecting the data from the event date. We perform it using the check-in system to track through our 7 iPad devices. All come with pre-installed, well-design, and themed check-in applications ready for all the guests. All they have to do is show us the QR code from the confirmation email we’ve sent them before to the iPad and done. This kind of technology helped us reduce the sloppiness and crowded around the registration counter, especially for private events like Cartier one. Using Happenn’s system helped the fuzziness from the uninvited guests a lot.

(Here’s our product. First, you don’t have to worry if your event guests are primarily elders. Our check-in system supported name searching in case they’re unfamiliar with the email or QR code. Or if the host has decided not to use the email, you can send the QR Code through the SMS channel instead.)

It’s Not Busy as It Looks 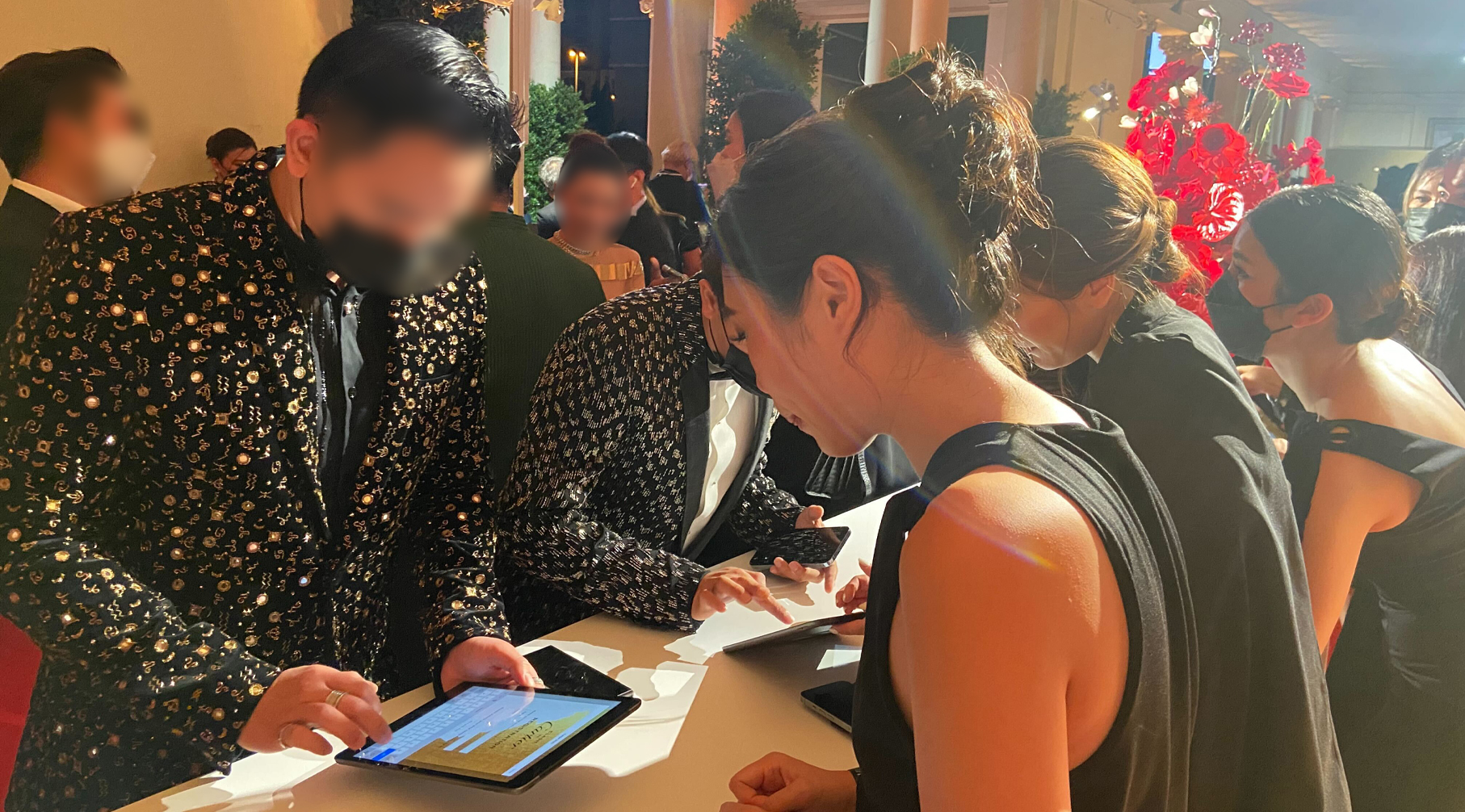 It’s finally the event date (August 1st, 2022). Over 400 guests have registered their RSVPs since the night before. Everything went well except for those who misspelled. Thanks to the support team for their quick problem-solving skills. The drizzling rain makes transportation a bit harder. And yes, our teammates are at their most well-dressed in months (COVID-19 makes us forget to do the make-up for a while!)

After passing through all the struggle, we arrived at the registration counter, which was smaller than we did because we had to share it with the other team and the press. We set up all three internet routers to use internally. Because of how crowdy the event is, we must prevent the internet bandwidth issue from the beginning. The only problem is the limited space that forced us to keep three of seven iPads in the bag (but we’ve prepared it anyway because we didn’t know what would happen when the event begins). The table was too small to put all of our team’s laptops to work there. So we have to move some of our team to the small room nearby, luckily, despite how small it is, the room is way more relaxed. 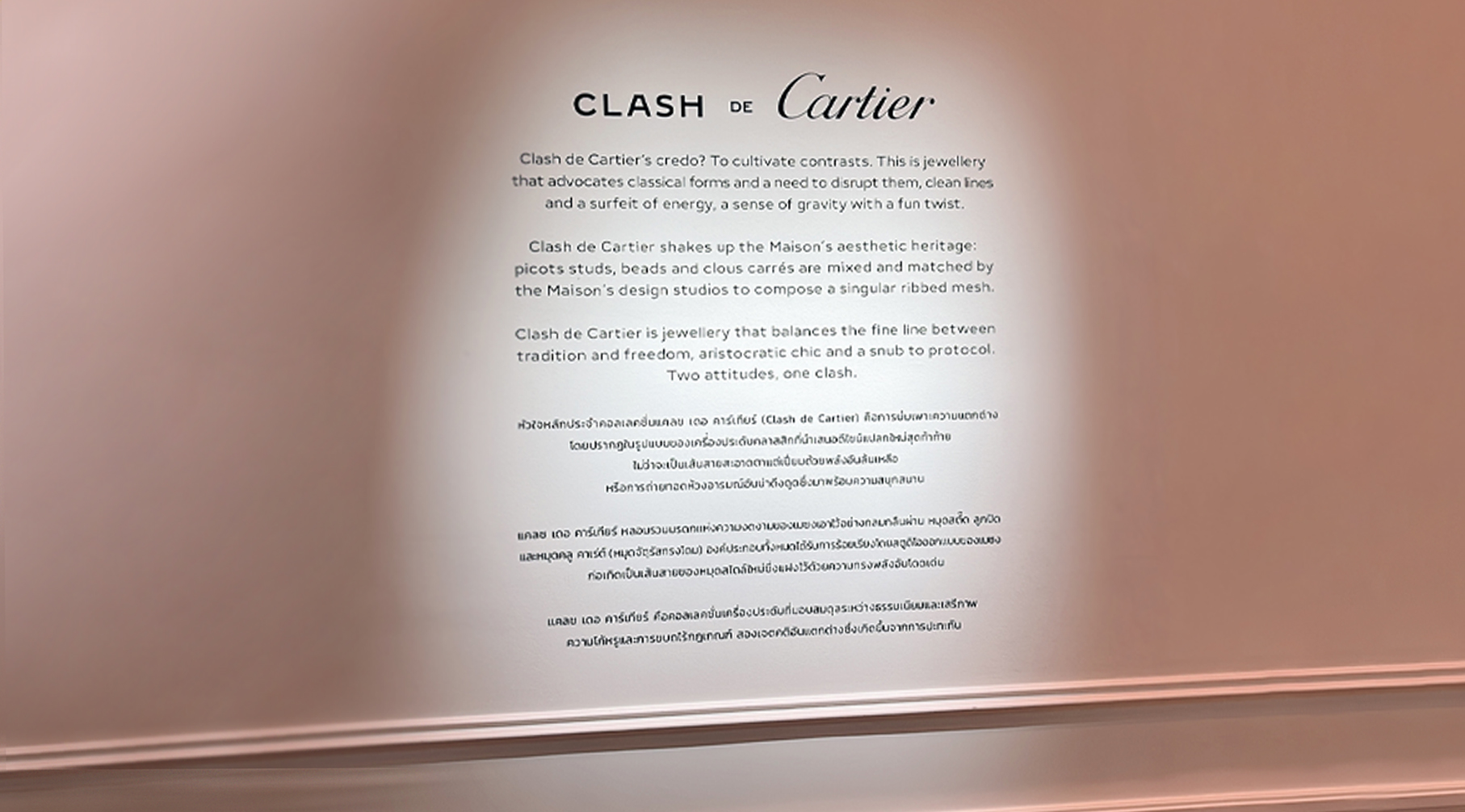 Shortly after we had prepared the registration desk, we heard a sound from outside the venue. The one and only Jackson Wang are coming. We also prepared ourselves to record some footage of this event for further use too. And those who aren’t related to the event (us too) were guided to stand out of the camera’s sight (did I tell you I’m also one of the Ahgase, in other words, the GOT7 band fans, and P’Jack is my main guy since he was a young man). The second when the car arrived, everything went more slowly. I saw Jackson Wang slowly stepping out of his car to the event’s gate not far away from me. It’s a heart-shaking moment, and I know you can imagine it. A million words come through my head, but as I’m on my duty, the only thing that makes sense to say to him right now is, “Please register before getting inside” (I ended up saying nothing because he’s the most famous guy for the night, there’s no knock-off version for sure).

And shortly after P-Jack went inside, the KOLs and people in Thailand’s entertainment industry followed. Some came to register at the desk alone, and some finished this step on their mobile phones. After that, the event got more crowdy, and the weather outside was getting more stuffy. The Happenn team has had nothing to do since we finished setting up and taught the on-site staff to use our system, but we remain in case anything happens.

Because we have prepared everything before, there’s nothing to worry about when guests arrive at the event during the early night. So, that’s our free time to enjoy the festive moment before the event. The event design is glamorous. The lighting was immersive and got along with Hua Lamphong’s design, representing both aspects and reflecting the Clash de Cartier’s collection concept very well (I’ve researched about them a bit before). All the guests were in white or black dresses. The color that emphasizes all those accessories is more significant. 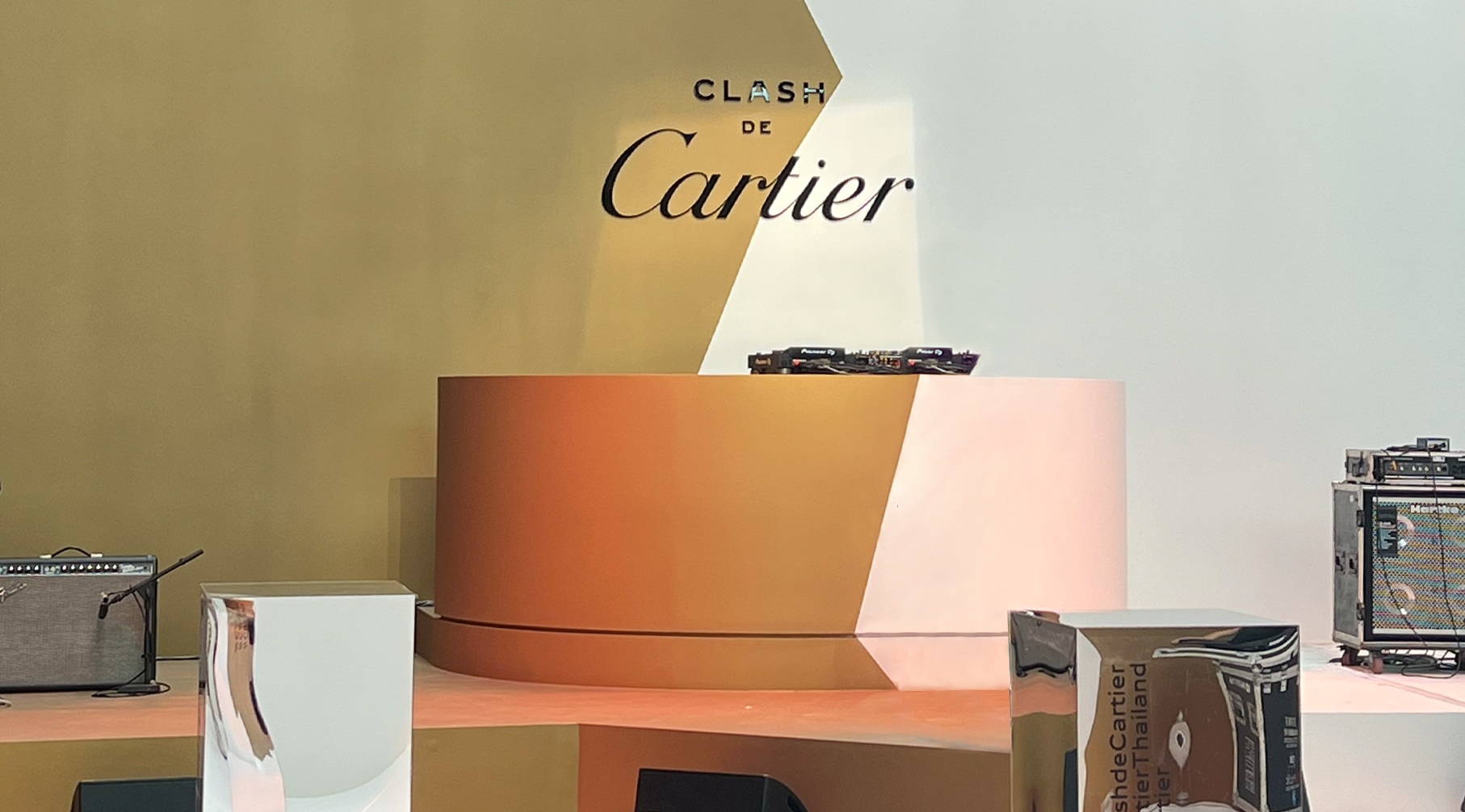 Let’s talk about my POV as event staff; the second I knew I would be a part of this monumental event, I got excited–but not that much. Because I knew there would be many celebrities there, but for the one who lives like no TV in the house, I barely know those people. I even thought I’d step aside to rest somewhere else after finishing my duty before the event (and it’s going to be a long night).

But it turns out that I got a chance to be at the same event with Jackson Wang, the VIP guest of Cartier. And here comes the over-excited feelings! When I saw the guest list sent internally for the system preparation and saw the name confirming the rumors were true. I sneaked from my working desk at the office into the toilet to sing the NANANA song alone (it’s like, 기부니가 좋아 나나나~, the happy person is me). So we’re going to meet. I’m not sure how close, but we finally breathe the same air 💛.

And we finally found him passing by. I’m so healed. I feel so lucky that I’m working in an industry that gives me a chance to fulfill my dreams with a moment like this. Even with the less preparation time and some sleepless nights, or sometimes opening a laptop while riding the taxi, the result was enjoyable, and everything went well. This event left an unforgettable mid-rainy-season memory to cause a smile on me whenever I think about it.

* Ahgase is the title of GOT7, a South Korean boy band group fandom. It means ‘the little bird.’ in Korean (because it sounds like ‘I got 7’ when you read the band name quickly). This word was invented by Mark Tuan, one of the members).